Bakery supplies in Bangkok and throughout Thailand

Austro-Pro was founded in 2007 and is now Thailand's leading supplier of bakery products.

Austro-Pro in Bangkok was established in 2007 by a team of Austrian bakery and pastry chefs. The name Austro-Pro reflects not only the founders' heritage but also the birthplace of some of the world's most famous pastries. The company was established to satisfy strong demand for high quality, convenient food products in Thailand.

The company's purpose-built bakery initially occupied two floors of a large building in the northern outskirts of Bangkok, not far from Don Muang Airport and near Future Park, Rangsit. In 2011 Austro-Pro took possession of all five floors in the building, converting them to additional preparation and storage areas. In the same year the company more than doubled its workforce and and expanded its fleet of temperature-controlled delivery trucks. 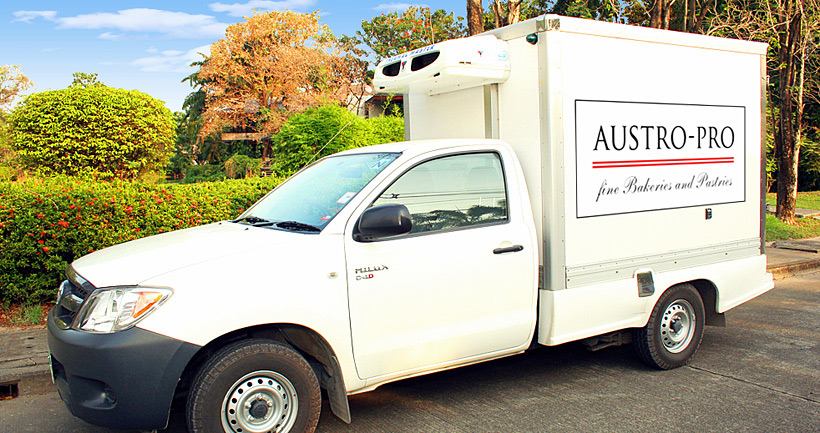 The company offers a huge range of freshly baked, baked frozen and raw frozen bakery and pastry products, all of which are free of chemical additives. As of 2016 the company's product range consisted of more than 400 items. Only 100% imported butter is used for the lamination of butter doughs; many other raw ingredients are also imported. All egg products are pasteurized and GMP and HACCP certified. The company's suppliers are regularly audited to ensure they maintain required standards.

Deliveries begin well before sunrise when freshly baked breakfast items are driven to hotels in Bangkok. Deliveries of frozen items continue throughout the day. All packaging is designed in-house and produced according to the company's specifications, using mainly double corrugated carton boxes and avoiding plastic containers where possible.

In 2015 Austro-Pro introduced a range of lunch, snack and mini-boxes. Boxes are supplied with 6, 4 and 2 items respectively; wholesale prices are available on request. More recently the company began participating at bazaars in and around Bangkok. These events have been a great success and generated a wealth of positive feedback from epicures who appreciate high quality products.

Bakery supplies in Phuket
In June 2016 Austro-Pro opened a new bakery in Phuket. The facility supplements Austro-Pro's production in Bangkok and offers the perfect "gateway" to customers in the south of Thailand. Full details to follow.

Information on this website is subject to change without notice. Please refer to our Terms and conditions. GMP certified by the FDA. HACCP certification pending. Copyright © Austro-Pro 2007-2021
Website by AB Design Bangkok